Did you know that most birds gather insects every day to nourish themselves and feed their offspring? Many people believe birds can survive eating seed from bird feeders, but most birds need insects to provide digestible protein for energy, migration, and breeding. A baby bird’s tender digestive system needs soft, fat-filled proteins from insects and caterpillars to fuel its growth.

The photo above shows an American bushtit (Psaltriparus minimus) gathering all sorts of insects, including aphids, from a salvia in a Southern California backyard. A bushtit is a tiny bird, smaller than many hummingbirds, weighing about .19 ounces. Despite their diminutive size, bushtits still need plenty of insects to feed themselves and their babies in the nest.

Birds are having a hard time finding enough insects to eat. Scientists have estimated that 40 percent of insect species are threatened by extinction. Insects are integral to the food web, eaten by everything from birds to mammals and fish. Insects also pollinate crops that produce one-third of the world’s food supply, and they break down waste.

Each of us can do our part to help increase bird populations. If we plant vegetation that is native to where we live, we won’t need to use pesticides or herbicides. It may seem counterintuitive to encourage insect life, but they are a valuable and necessary part of our food cycle. 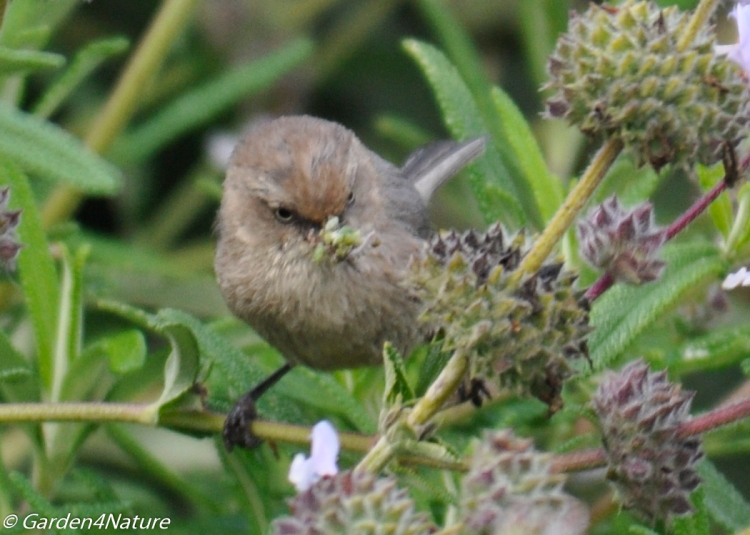 The next time you need to replace a plant in your yard, plant a native! Your soil health will improve (without amendments or compost), you won’t need to use pesticides, herbicides or fertilizers, songbirds will come to nest, and butterflies will appear.

Roger’s Gardens and Tree of Life Nursery are offering a free California buckwheat to homeowners who want to try starting a native plant garden in their home landscape. Stop by their garden centers to pick up a free buckwheat plant while spring is in the air.

This site uses Akismet to reduce spam. Learn how your comment data is processed.